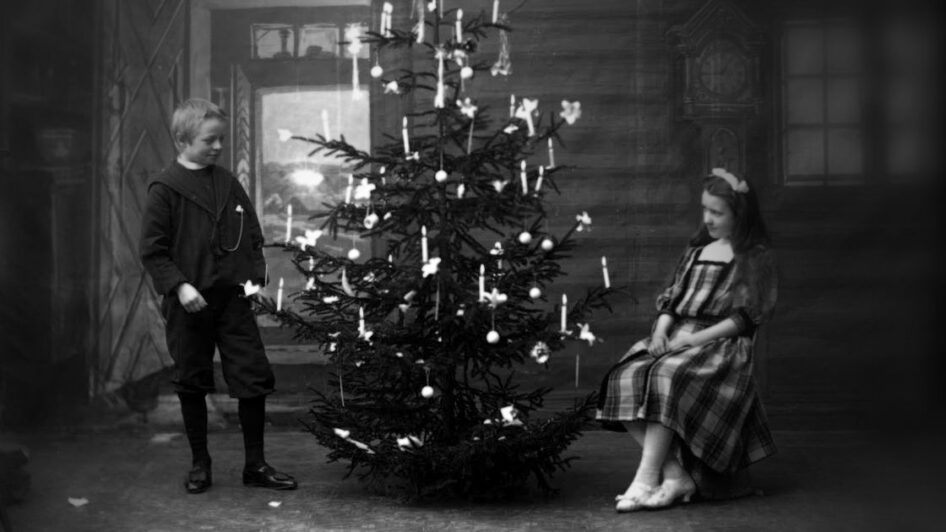 Christmas of the 20th Century is a new series of the Merry Little Podcast that focuses on a full century of change. How we celebrate Christmas evolved with the changes in technology and media as the 20th century progressed.

In this episode we explore the emerging technologies of Christmas of the 20th century in Christmas decor through electrifying the Christmas tree. Christmas tree safety was long a top of debate but adding the safer and more festive elements of electric lights was no cheap feat.

Recorded music likewise was in its infancy and few could afford what little music was offered.

Movies were only beginning between 1900 and 1910 but Christmas was at the forefront of this new technology. The very first movies put on film were about Christmas, including a now-famous 1898 production that featured Santa Claus landing on the roof of a home and delivering presents to sleeping children.

A hold-over from the previous century was the Christmas card. It only became more popular in the new century and it burdened post offices everywhere.

Coast-to-coast media, even if it was only in print, went far to influence the fads of Christmas and few fads were as crazy as the toy teddy bears of the early 1900s, a tradition that has endured well into the 21st century. Marketed by importers of pin cushions, the teddy bear craze was driven by President Teddy Roosevelt, who famously refused to kill a bear that had been set up by the media.